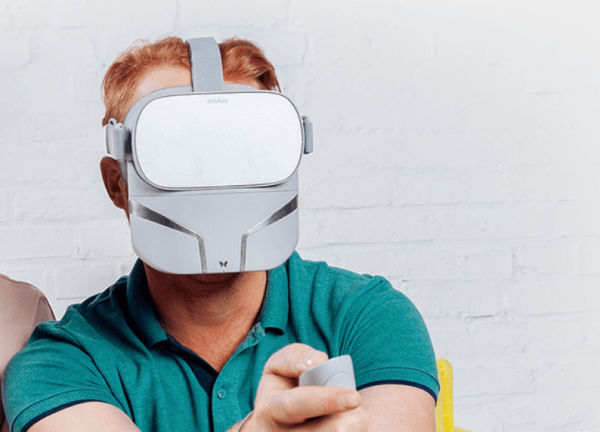 Although the Feelreal scent mask for virtual reality isn’t a nicotine vaping system or e-cigarette, it does vaporize aromatic liquids for user inhalation, which according to the company puts it in same FDA certification bracket as those devices. While the company was confident back in November of its chances to pass FDA approval, it’s looming near a final roadblock that could make or break the product.

Feelreal had its first taste of notoriety back at GDC 2015 when the company debuted its public prototype, a sort of smell-o-vision add-on for VR headsets that provided users with a number of scents through a clip-in cartridge system as well as hot and cool wind, water mist, and haptic vibrations. In 2019, the company went on to launch both a Kickstarter and IndieGogo campaign to bring the device to consumers, with the combined funds tallying over $190,000.

Feelreal was originally eyeing deliveries of the $209 device as early as August 2019, although it lagged behind somewhat with a redesign that improved the mask’s attachment to VR headsets, which currently includes Oculus Rift, HTC Vive, PSVR, and Oculus Go. The creators also boast out-of-the-box support for games such as Beat Saber, Skyrim VR, and Arizona Sunshine, and has both Unreal and Unity SDKs so game developers can support the mask. The Feelreal mask is however based on the same tech as vaping devices, and uses basically the same liquid as e-cigarettes, albeit without nicotine. Back in the heady days of 2015, this wasn’t an issue since vaping was unregulated on a federal level, but then the company hit its first real roadblock. Amidst a pubic health scare surrounding vaping products late last year, the US Health and Human Services Secretary Alex Azar announced that manufacturers of flavored vaping products would have the opportunity to file for approval from the FDA, but that those products would be off the market until the FDA gave the say so.

A recent CNN report however maintains that the White House will soon announce an outright ban on most flavored e-cigarettes cartridges, with the exception of tobacco and menthol flavors, putting Feelreal in the position where it either passes a retest very soon and is reclassified, or is outright banned as a flavored vaping product, which would either kill the product entirely or necessitate some sort redesign to get around regulations.

The company issued an update last week addressing some of the FDA regulation issues it’s been facing. You can read it in full below:

The information we have received from FDA considers all types of vaping devices dangerous to people. Since Feelreal Mask is technically a vaping device, we had to start a new round of testing and improving the product to get a permission for mass production and sales.

We didn’t know about the possible danger when we have started to work on the Mask concept, and we do care about our users health. So if we don’t get the approval after a new series of tests, we will have to close the project. We’re terribly sorry for the inconveniences, but there’s nothing we can do at the moment. We couldn’t imagine that our Mask would fall under such restrictions.

We will put a new update right after we have any new details on this matter.

A company spokesperson managed to answer a few questions in the comment section of the update touching on subjects such as refunds and eventual product redesigns.

“Unfortunately we can’t issue you a refund right now,” the spokesperson told a number of concerned backers. “Since it’s a crowdfunding campaign, all the funds were transferred to the production site. We are doing our best to bring Feelreal to you as soon as possible, but with the best of possible legal procedures. Project is not closed, we just have to postpone the realisation a bit more.” The spokesperson emphatically repeats that the project is not cancelled, but in the same breath says that “the whole concept is under restrictions,” which would necessitate a full redesign.

What’s still unclear is exactly what the company’s plan ‘B’ actually is for converting the scent mechanism into something that fits it outside of the category of a vaping product. Much like the popular vaping devices that drew ire from government agencies late last year, the company’s revenue model is geared towards selling a vast array of compatible cartridges with the proviso that users would return to fill up when they ran out, or when a new mix was created for a newly supported game. That recurring revenue model would be in immediate danger if Feelreal decided to simply omit the scent-producing part of the device.

Feelreal is due to comment as new information arises, and considering the impending ban, we expect to hear fairly soon about the company’s plans for the unique VR scent mask.