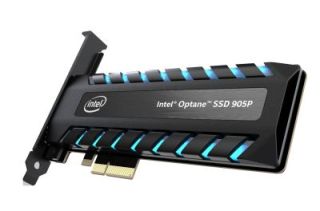 In a surprising move with little fanfare, Intel announced that it is discontinuing all of its Optane-only SSDs for the consumer market. Surprisingly, the company says those drives aren’t going to see Optane-only replacements, apparently marking the end of its enthusiast-geared Optane SSDs for desktop PCs.

The discontinuation notices for the M10 and 800P series also point Intel’s customers to the Optane Memory H20 drives. The H20 drives come with Optane memory paired with QLC flash on the same device. These caching drives aren’t nearly as fast as Optane-only drives (they aren’t even in the same league) and are designed primarily for laptops and the OEM market.

Intel’s discontinuation period is incredibly brief, too, with all discontinued drives no longer offered as of the publication date of the notices, or a few days prior as we see with the 800P series:

The last orders will ship on February 26, 2021, for all models. All of Intel’s discontinued consumer drives come with the first-gen Optane Memory (3D XPoint), but the company recently unveiled its new Optane SSD P5800X for servers. This new drive brings second-gen Optane to market for the first time, signaling that Intel remains committed to using the exotic memory for the enterprise market. For now, it doesn’t appear that the second-gen Optane will come to the desktop PC.

Intel is at the beginning of a multi-year journey to sell its NAND business to SK hynix, but it will retain its Optane memory business and IP. That isn’t surprising given that the exotic underlying 3D XPoint technology is jointly-designed by Intel and Micron and not available to other memory producers, giving Intel a differentiated product for the high-margin enterprise market.

Apparently, Intel’s decision to reduce its exposure to the NAND storage market comes along with a new focus on the enterprise market for the Optane brand. Intel’s Optane products for the data center also include its persistent memory DIMMs that can function as an adjunct to main memory – a capability that only Intel offers.

Intel’s Optane Memory drives for the consumer market are hands-down the fastest SSDs on the planet, laying waste to competing NAND-based SSDs in nearly every conceivable metric – except cost and capacity. As we often see, ‘cheap and good enough’ tends to win in the market, and the pricing and capacity advantages of garden-variety TLC SSDs, paired with the good-enough performance for most consumers, relegated Intel’s Optane drives to a niche category for either the most hardcore enthusiasts or the workstation market. However, despite those challenges, Intel’s Optane remained the only 3D XPoint-powered SSDs on the market, giving the company a completely unique offering in the consumer storage market.

Given the demise of the consumer-focused Optane drives, it appears that Intel will rely upon its enterprise-class Optane drives to address all professional segments, including the workstation market. Intel currently doesn’t manufacture Optane memory in high volumes – it simply purchases the underlying 3D XPoint memory from Micron. As of yet, Micron doesn’t have any 3D XPoint SSDs or DIMMs on the market.

There is an outside chance that Intel has future Optane SSDs in development for the consumer market and isn’t ready to release them yet, but that would make the discontinuation an odd maneuver. Intel traditionally doesn’t discontinue products until its new models are already shipping. We’ve followed up with Intel for more detail and will update as necessary.