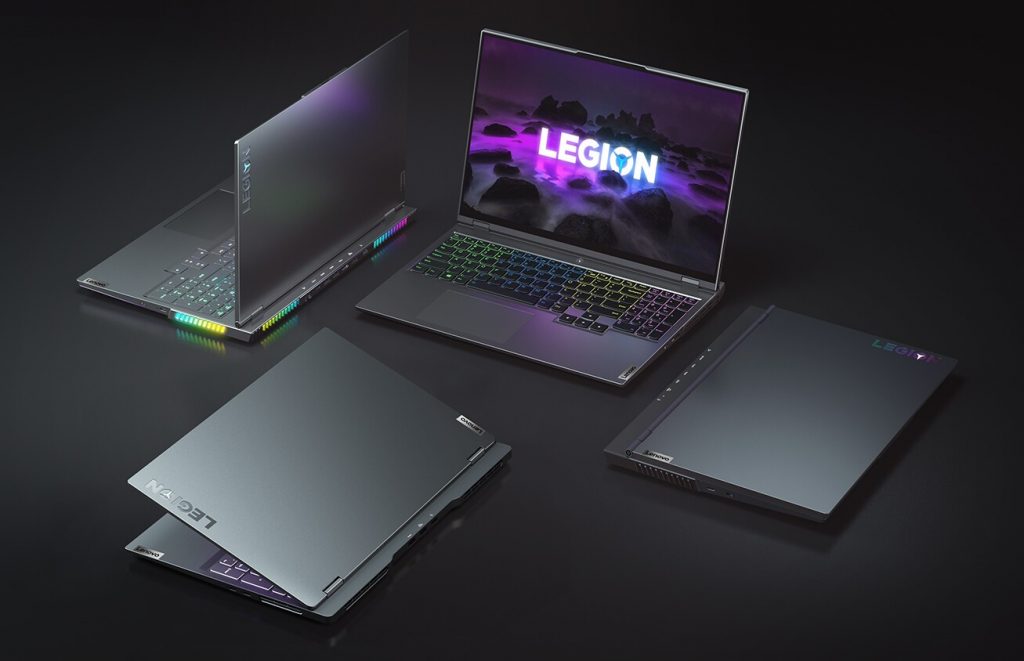 The Legion 5 Pro is Lenovo’s latest contender in the high-end AMD gaming laptop world, sporting a 45W Ryzen 7 5800H CPU and a mobile Nvidia GeForce RTX 3070. To mark that occasion, Lenovo’s given the Legion 5 Pro a bit of a redesign over past models, fine-tuning the keyboard and display to help impress. This includes a new 16:10 aspect ratio and 2560 x 1600 resolution, which does move this laptop toward the expensive end of things ($1,899 as configured). That said, this is a device that feels premium and fun to use throughout, so you can argue that it earns that high price. 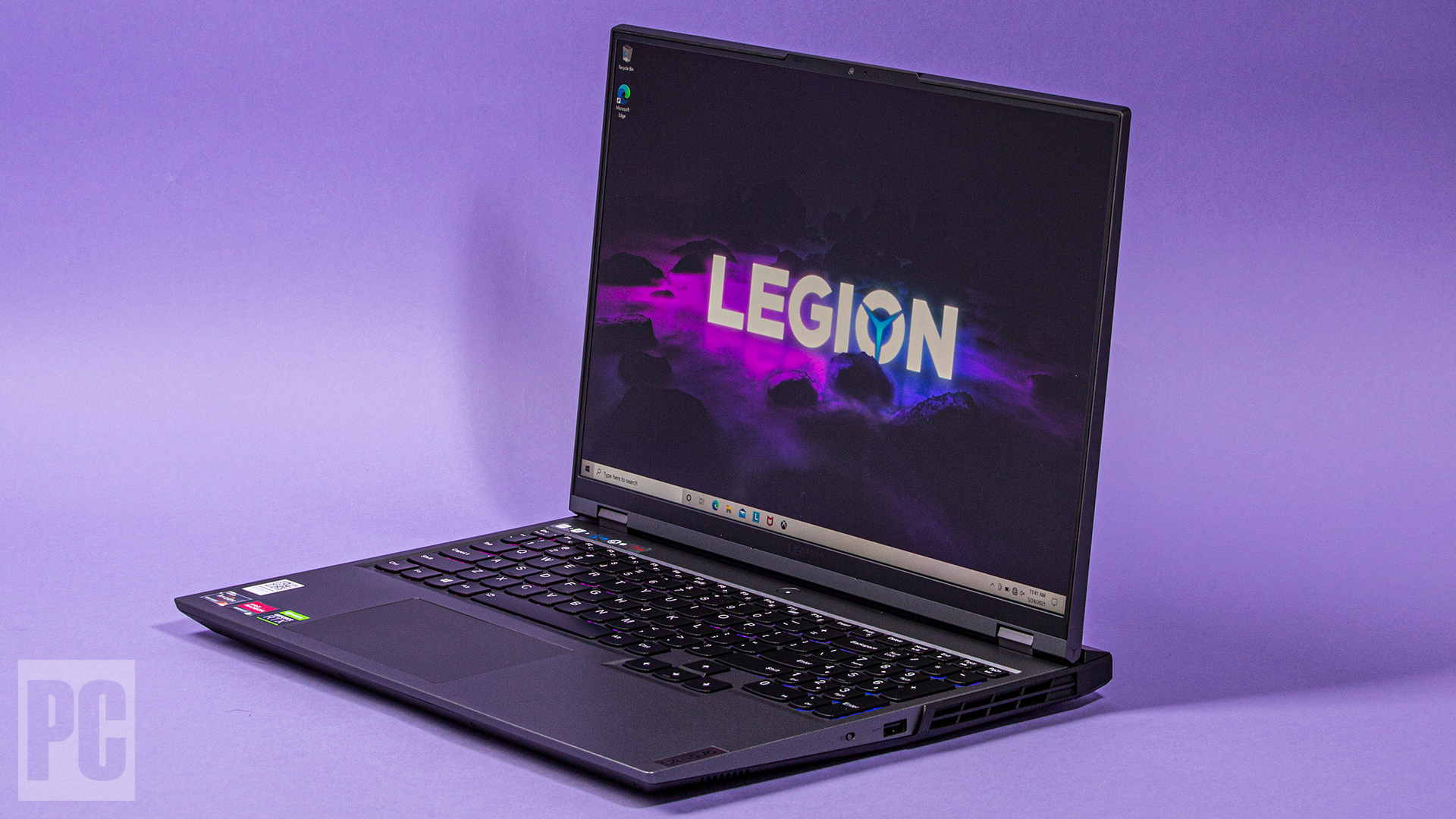 The Lenovo Legion 5 Pro looks in many ways identical to past Lenovo Legion models, with the key difference here being thinner bezels around the screen and a Y-shaped LED logo on the lid. Lenovo and Legion logos are still plentiful, from the keyboard deck to the hinge to the bottom screen bezel. The back of the hinge still extends far past the screen, with labeled I/O adorning the middle section. Large vents also sit along the laptop’s sides, back and underside.

The Lenovo Legion 5 Pro is also a heavy laptop, weighing in at 5.4 pounds. It’s not alone here, though. The Alienware m15 Ryzen Edition R5 is 5.34 pounds, while the Razer Blade Pro 17 is even heavier than the Legion at 6.06 pounds. The MSI Stealth 15M once again lives up to its name here, though, weighing just 3.73 pounds.

With this heft comes plenty of space for ports, although most are relegated to the back of the laptop’s hinge. The Legion 5 Pro has a single USB 3.2 Gen 2 Type-C port on its left side, plus a 3.5mm combination headphone/microphone jack. The laptop’s right side has a USB 3.2 Gen 1 Type-A port and a hardware toggle that can turn power for the webcam on and off. The back of the laptop’s hinge, meanwhile, is where you’ll find the charging port, plus three additional USB 3.2 Gen 1 Type-A ports and a single additional USB 3.2 Gen 2 Type-C port. That Type-C port also supports power delivery, though you’ll want to use the power brick when gaming. There’s an HDMI 2.1 connection and an RJ-45 ethernet port here, as well. 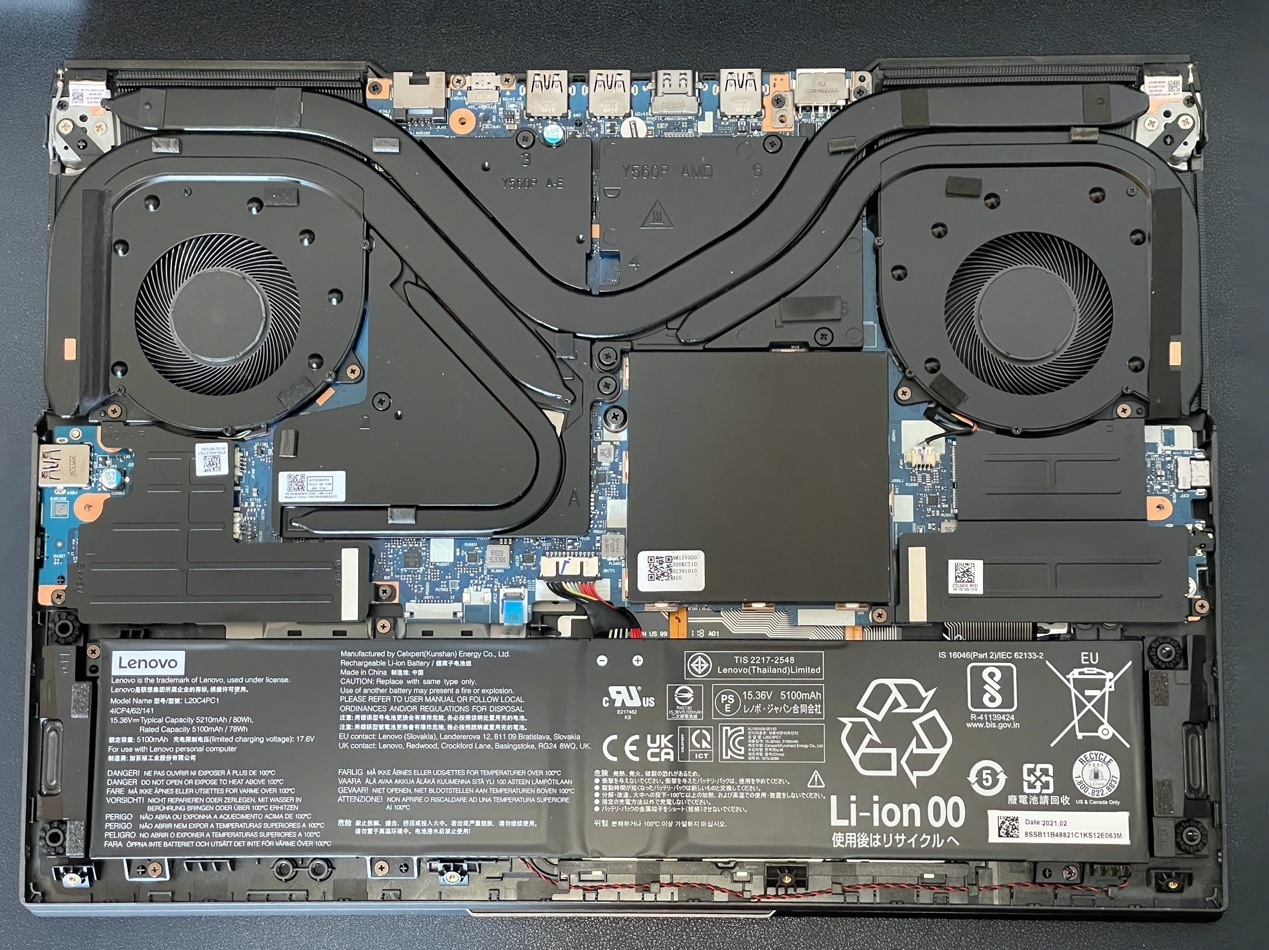 Generally, the Lenovo Legion 5 Pro tended to sit between second and third place in our gaming tests, usually behind the Razer Blade Pro 17 and alternating placements with the Alienware M15 Ryzen Edition R5.

In Shadow of the Tomb Raider’s built-in benchmark running on its highest settings at 1080p, the Lenovo Legion 5 Pro hit an average of 80 fps. That’s slightly below the Razer’s 86 fps but slightly above the Alienware’s 73 fps. The MSI lagged well behind at 64 fps.

The Legion 5 Pro didn’t perform as well in Far Cry: New Dawn’s benchmark running at 1080p with ultra settings. Here, its 71 fps fell well behind the Alienware’s 79 fps, and even further behind the Razer’s 89 fps. Even the MSI beat the Legion, with an fps of 77.

Grand Theft Auto V’s benchmark running on very high settings at 1080p saw the Legion 5 Pro’s performance jump back up. The Legion 5 Pro ran at 84 fps here, above the Alienware’s 82 fps and the MSI’s 78 fps. The Razer was far more impressive, though, achieving 102 fps.

We also ran the Legion 5 Pro through our usual gaming stress test, to check how well it would perform in an extended heavy gaming session. Here, we ran the Metro: Exodus 1080p benchmark 15 times in a row using its RTX preset. The Legion averaged 65 fps throughout this run. Its CPU ran at an average 3.83 GHz, while its GPU hit an average 1.61 GHz. The CPU averaged a temperature of 83.48 degrees Celsius (182.26 degrees Fahrenheit) during this test, while the GPU was cooler, at 75.21 degrees Celsius (167.38 degrees Fahrenheit) average temperature.

I also played Control for a half-hour on the Legion 5 Pro, to get a personal feel for gaming on it. The Legion 5 Pro has a 2560 x 1600 screen, which makes anecdotal testing especially important as all of our benchmarks are run in FHD. On 2560 x 1600 on the high preset, the game generally ran between 75 – 85 fps. Dropping the resolution to FHD pushed that range up to 100 – 110 fps. When I turned ray tracing on and set it to its high preset, each resolution’s frame rate range dropped by around 20 frames.

The Legion 5 Pro was never hot to the touch while I played, although it was moderately loud.

While the Lenovo Legion 5 Pro is a pretty big laptop to lug around for productivity work, its 45W AMD Ryzen 7 5800H CPU does make it a powerful work machine as well.

In Geekbench 5, which is a synthetic benchmark that tests general PC performance, the Legion 5 Pro generally outperformed its competition. It scored 1,456 on single-core tests and 7,342 on multi-core tests. That’s above the Alienware M15 Ryzen Edition R5’s 1,247/7,288 scores, which is impressive as that laptop shares the Legion’s CPU. It’s also above the Razer Blade Pro 17’s 1,288/6,144 scores, which makes sense as that laptop’s CPU is a generation behind (10th gen Intel), though it is 45W. The MSI Stealth 15M, which has a 35W 11th Gen Intel CPU, predictably performed much weaker than the Legion (at least on the multi-core test) with scores of 1,577/5,363.

The Lenovo Legion 5 Pro and the Alienware M15 Ryzen Edition R5 both had similar scores in our file transfer test, where we track how quickly a machine can move 25GB of files. The former did so with an 832.66 MBps speed, while the latter was slightly faster with an 874.14 MBps speed. The MSI Stealth 15M was the next fastest, with a speed of 651.85 MBps, and the Razer Blade Pro 17 was the slowest laptop we tested, with a speed of 547.2 MBps.

The Legion 5 Pro and the Alienware M15 Ryzen Edition R5 had near-identical scores in our Handbrake video transcoding test, where we time machines to see how quickly they transcode a video down from 4K to FHD. The Legion finished transcoding in 7:06, while the Alienware was literally just a second faster (7:05). The Razer Blade Pro 17 was the next fastest with a 10:10 time, and the MSI Stealth 15M was the slowest of the bunch with a time of 11:03. 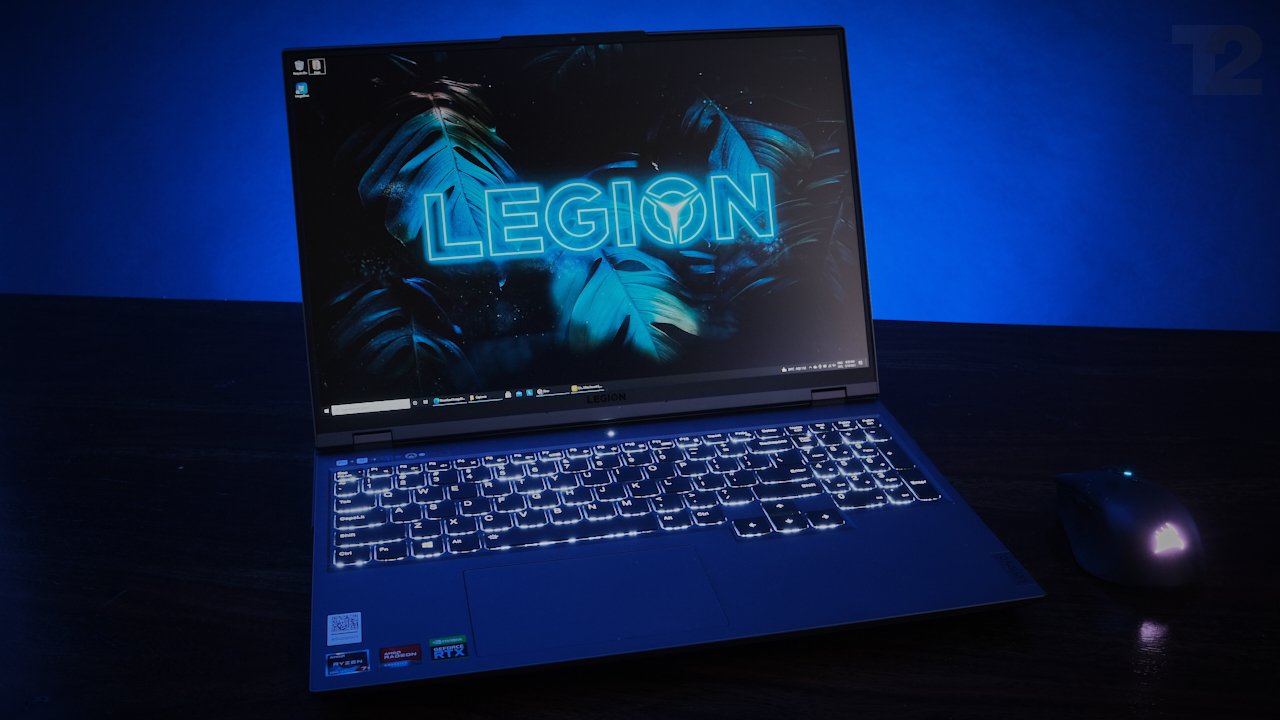 The Lenovo Legion 5 Pro joins in on the 16:10 trend with a 2560 x 1600 IPS monitor that has a 165Hz refresh rate. I used this monitor to watch the final trailer for A Quiet Place II, which had impressively deep blacks and somewhat vivid colors. Even with my curtains up and my lights on, viewing angles were essentially perfect, and glare was almost a non-issue. Lowering my curtains and turning my lights off eliminated glare entirely.

Those impressive viewing angles and the lack of glare can probably be attributed to the display’s high brightness. In our testing, we found that it hit an average of 472 nits, which far exceeds the Alienware M15 Ryzen Edition R5’s 328 nits. The Razer Blade Pro 17 and MSI Stealth 15M were even dimmer at 277 and 255 nits, respectively.

Since the Legion 5 Pro has a 16:10 screen, I would also be remiss if I didn’t mention web browsing on it. I really appreciated the extra screen space when typing emails and reading articles, which worked especially well with the higher-than-1080p resolution. Plus, the laptop’s large trackpad made navigating that extra screen space easy. The Lenovo Legion 5 Pro has a “TrueStrike Gaming Keyboard,” which features 100% anti-ghosting, 4-zone RGB and a full tenkey (though the latter is a bit squished). Lenovo also promises “excellent key travel,” although it hasn’t provided numbers to us.In my experience, using the TrueStrike keyboard was equivalent to using one of Lenovo’s ThinkPad keyboards, which is to say that it was exceedingly comfortable and responsive. Like ThinkPads, the Lenovo 5 Pro’s keycaps are curved at the bottom and concave in the center, which makes typing by touch alone a breeze. I felt like I had plenty of tactile feedback and the key travel did seem generous, so I was easily able to hit the upper end of my 75 – 80 words per minute average on 10fastfingers.com’s typing tests.

The Legion 5 Pro’s precision touchpad is a generous 4.7 x 3 inches large. Its smooth surface made both moving my cursor and inputting two- and three-finger multi-touch gestures like scrolling and switching apps a breeze. It does sit slightly off-center, although I found that its palm rejection was effective enough that I was able to play WASD shooters while my palm touched the touchpad without it affecting mouse input. You can also toggle touchpad input on and off both in Lenovo Vantage and with an Fn row keyboard shortcut.

Like most of Lenovo’s laptops, the Lenovo Legion 5 Pro doesn’t have much in the way of bloatware, instead offering an array of genuinely useful utility programs.
Lenovo Vantage is where you’ll probably spend most of your tinkering time. You’ll set up your keyboard lighting from here, plus toggle different battery saving and performance options on and off as well as monitor your CPU and SSD usage. Vantage is also where you’ll update your PC’s BIOS, set up macro keys and more.

Lenovo Utility is far simpler, and simply displays icons on your screen whenever you use a keyboard shortcut — for example, turning off the touchpad.

The Nahimic Audio Console is here too, and comes with an equalizer to fine tune what your speakers sound like, plus movie, music, video call and gaming presets if you don’t want to mess with it in detail. Dolby Vision is also present, and lets you quickly toggle your screen to prioritize brightness, vivid colors or even a dim look.

In a puzzling move, our review unit also came installed with AMD Radeon Software, even though this laptop uses an Nvidia GPU. As such, it does nothing when you click on it.