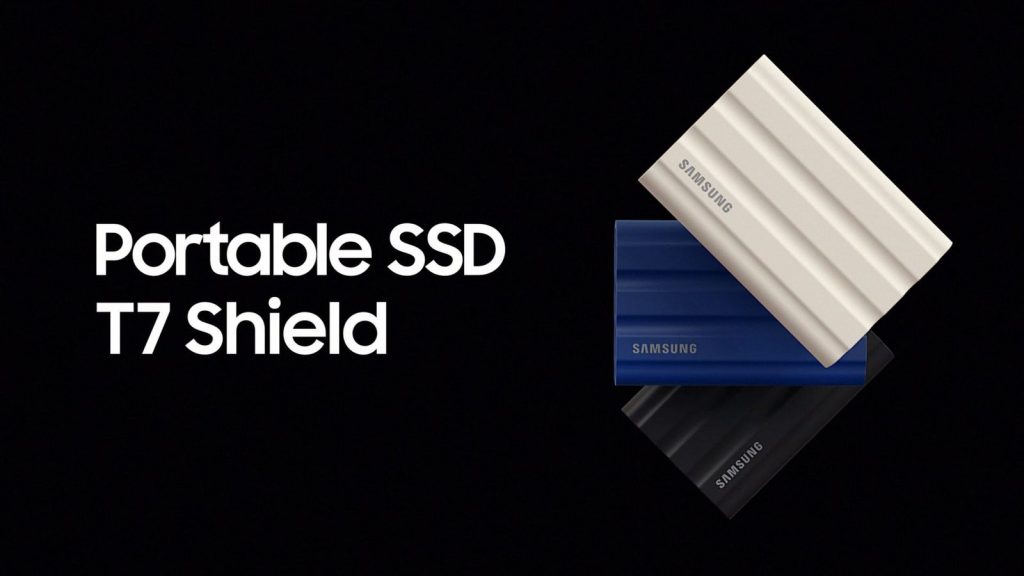 It’s been more than a year and a half since we reviewed Samsung’s T7 portable SSD, and today we have the new Shield model in the lab. The T7 Shield takes the original formula and focuses on improving its physical endurance, addressing one of our complaints with the T7 that lacked the Ingress Protection (IP) rating that indicates it is shock, water and dust-resistant. This caveat also applied to the T7 Touch we reviewed way back in 2020.

The drive comes in three colors – black, beige, and blue – inside a shell that’s a bit thicker than its predecessors. This shell is made from an aluminum body covered with rubber, thicker due to the external ribbing that helps protect against drop damage. Additionally, Samsung has added two distinct barriers to protect the USB port, designed to keep out environmental elements like water and dust. Together, all of these factors enable the T7 Shield to meet IP65 certification requirements.

What else is different about the Shield? Well, a lot is actually similar to the T7. Samsung still uses the DRAM-less Pablo SSD controller paired with an ASMedia ASM2362 bridge chip. AES 256-bit hard encryption is, thankfully, still supported. Many other specifications, such as the three-year warranty, remain the same. The T7 Shield also comes with the same number and type of USB cables. However, Samsung has opted for a newer type of flash, and the shift towards a durable design is substantial.

Samsung also ensures compatibility with Windows 7 or higher, macOS, and Android Lollipop or higher. Compatibility for mobile devices includes the T7 Shield operating within the USB power specification, which means a maximum power draw of between 2.5W and 7.5W, depending on the port. Regardless, Samsung promises to maintain sufficient performance to meet high-resolution video recording requirements, defined as the ability to write at 900MBps consistently.

Samsung also made a concerted effort to reduce waste on this product and earned a Product Carbon Footprint label from the Carbon Trust. This essentially means that all steps involved in creating the product and its packaging were designed and verified to minimize the resultant carbon footprint. For example, Samsung uses pulp material with one-third less tray packaging. It’s hard to complain about that.

This product is otherwise not too exciting, given that it doesn’t improve much on models going back over two years. It’s probably best to focus on what it does better – the T7 Shield has increased durability and guaranteed performance. This makes it an excellent choice for photographers and videographers in the field who want something consistent and reliable. We will see if this bears out in testing.

The Samsung T7 Shield comes in 1TB and 2TB capacities. It’s nice to see a 2TB option, and considering this drive is ideal for those who likely need capacity, the omission of smaller SKUs is not an issue. The drive is rated for up to 1,050/1,000MBps for sequential reads and writes, respectively. This is quite modest as a result of the 10Gbps bridge chip, especially considering we have 20Gbps and Thunderbolt 3 portable SSDs on the market. However, Samsung ensures 900MBps and 1000MBps sustained performance for the 1TB and 2TB SKUs, respectively, which is particularly excellent for the intended market. This is almost twice as fast as SATA-based portable options.

The T7 Shield has many features designed around security and durability, including hardware encryption. The drive is also IP65 rated and includes protection against dust, water, shock, and vibration. This includes being able to survive drops of up to three meters. Samsung additionally has a Dynamic Thermal Guard, which adjusts the drive’s performance to make sure the casing remains below 57C, which is notably lower than the 60C international standard — this reduces the risk of users getting injured when grabbing the case.

Our T7 Shield sample is clad in a nice blue case, clearly thicker than the older T7 models. With its considerable contours, the rubber exterior helps reduce vibration and shock, including from drops. One face has the USB-C connector and indicator light, while the other has a label with a QR code and pertinent specifications, including the model and serial numbers.

The T7 Shield has thermal padding and an otherwise understated, green PCB. We can see the expected controller, bridge chip, and two NAND flash packages, with notably no DRAM on board.

Samsung’s Pablo controller, labeled S4LR033, is a DRAM-less four-channel design. This controller is also used in the other T7 models as well as Samsung’s 980 desktop NVMe drive. The bridge chip is ASMedia’s ASM2362, capable of 10Gbps transfer speeds, and Samsung uses it on the other T7 models and many other portable SSDs. The flash as labeled is Samsung K9DVGB8J1B-DCK0, which we have seen on other drives like the Samsung 870 EVO. It’s Samsung’s 128-layer TLC. 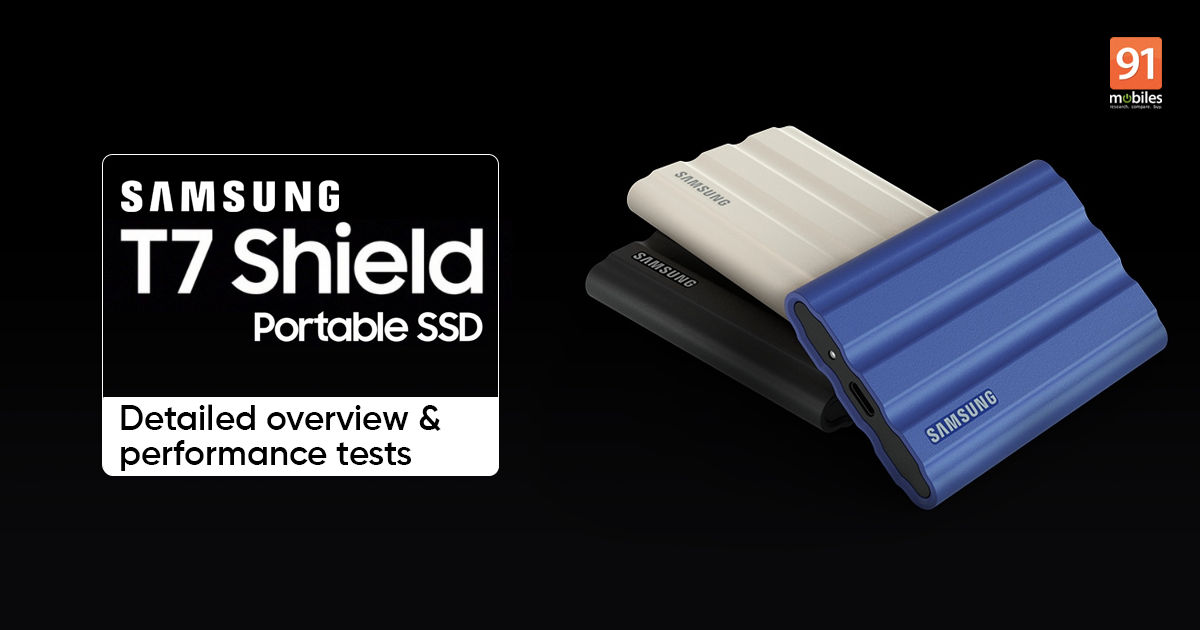 This 128-layer flash tends to come in 512Gb, or 64GB, dies, and each of the NAND packages here is 8Tb or 1TB in capacity. This suggests a 16DP (sixteen dies per package) configuration, similar to what’s in the 870 EVO, for a total of 32 dies at 2TB. Each die is capable of up to 82MBps in its native, non-SLC mode, which is more than sufficient to hit Samsung’s stated speeds. This does require the proper SLC cache design, particularly at 1TB, which is to say it should be more conservative to ensure a high level of performance.

This flash is also seen in some newer 970 EVO Plus drives — notably slower in TLC mode at 1TB than the original model that launched with less-dense, 92-layer TLC — but, if necessary for interleaving, it also appears in a 256Gb or 32GB per die configuration. Denser dies are particularly useful at higher capacities with four-channel controllers, such as we have here.