Motherboards get segmented and marketed to specific groups, like gamers or professionals. But each major board partner also has a board dedicated to getting the most out of overclocking. Any of these boards aimed at a specific niche can usually do at least an adequate job as a more general-purpose board as well. That brings us to Gigabyte’s Z690 Tachyon, which is designed to handle the rigors of extreme overclocking, but is also surprisingly well-rounded for more typical computing needs. This overclocking-centered board includes all of the basic specifications of the Z690 platform and features an extreme overclocker will love for $549.99. 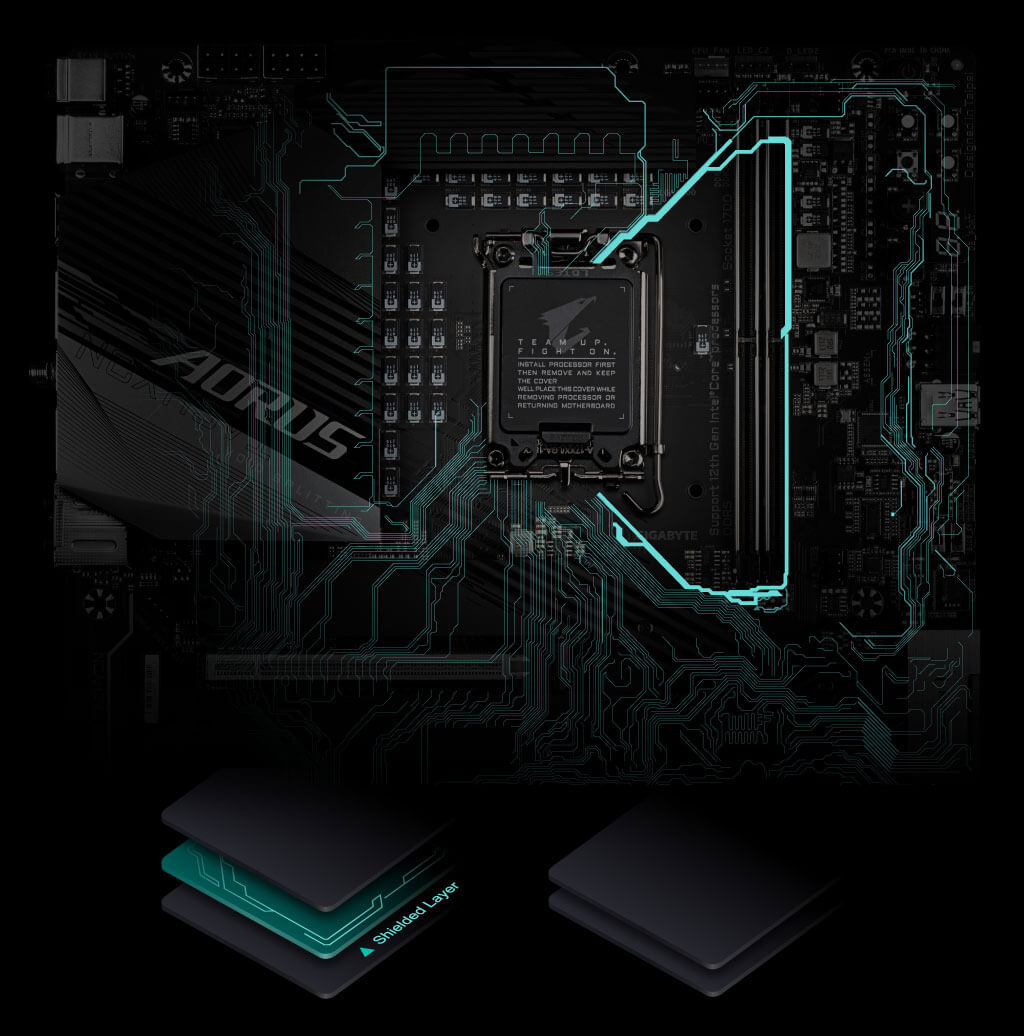 The Tachyon has all you’d expect in a Z690 motherboard. There are a total of four M.2 sockets (but none are PCIe 5.0), premium audio, plenty of USB ports (including USB 3.2 Gen 2×2 ports), overbuilt power delivery, along with built-in overclocking buttons and switches to help speed enthusiasts get the most out of their platform. Compared to the Z590 version, the new model sports similar styling and layout. There’s one less PCIe slot, one more M.2 socket, and much-improved VRMs to help support extreme overclocking of Intel’s 12th Gen Alder Lake processors.

Performance using the Z690 Tachyon was slightly above average overall, with most benchmarks running as fast or faster than on other boards. We saw some of the fastest results in our new Blender benchmark, Cinebench R23, Procyon Office, and more. Power consumption was, surprisingly, slightly better than most, while gaming performance was spot on compared to others. The only result slower than average was the Procyon Video editing test. In our testing, almost all motherboards from Gigabyte sit around this same middling score in that benchmark. In all, the Tachyon is one of the faster Z690 boards we’ve tested out of the box.

Below, we’ll look more closely the latest Tachyon’s features, including all of the overclocking goodies, software and performance, to see if this $550 motherboard is worth the expense and perhaps a place on our best motherboards list. But first, here’s a detailed list of the Z690 Tachyon’s specs, direct from Gigabyte.

Inside the Box of the Gigabyte Z690 Tachyon 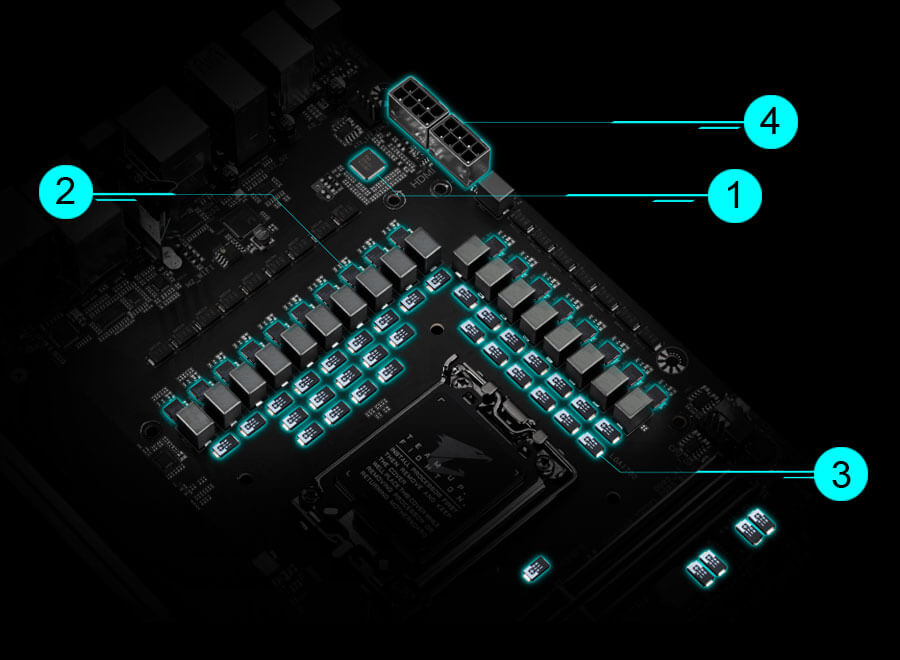 Inside the box, along with the motherboard, Gigabyte includes your standard fare of accessories including SATA cables, Wi-Fi antenna, and more. Curiously, a driver disk/USB stick is missing, but you can download them from the website. Below is a complete list of the included extras.

Design of the Gigabyte Z690 Tachyon

Taking the E-ATX Z690 Tachyon out of the box, we see a black PCB with black heatsinks and gray accents. The oversized VRM heatsink looks capable of removing heat from the VRM under most circumstances. Outside of all the buttons and switches, there’s some Aorus branding on the left VRM heatsinks and an etched Aorus falcon on the gray chipset heatsink.

The Tachyon comes with two zones on integrated RGB lighting. The first is underneath the Aorus branding on the left VRM heatsink, while the second is around the chipset, which lights up a frosted strip between the M.2 heatsinks and chipset. The glow here isn’t going to light up your case out of the box, but it does provide some nice accent lighting.

Getting into the details, starting with the top half of the board, on the left side we spy the huge heatsink covering the left VRM bank. While both VRM heatsinks are passively cooled, there’s enough surface area for these to be effective. There’s also a heatpipe that connects the two VRM heatsinks in order to share the load. Just above this massive heatsink are two 8-pin EPS connectors with metal shielding that provides power to the processor. There’s also a 4-pin fan header in this area too.

Moving right, past the socket area, there are a slew of premium Tantalum capacitors which Gigabyte says improves transient response, while the flat shape of them yields less mechanical interference with extreme cooling methods (think a dry ice/LN2 pot there). It’s much easier to prepare (read: insulate) the board with this shape than the other cylinder-shaped caps.

Continuing our journey to the right, we run into two reinforced DRAM slots, with single-side locking mechanisms. With only two slots (a nod to the overclocking-centric design of the board),  maximum support for the Tachyron is 64GB, which is still plenty for most users. The two-DIMM daisy chain memory trace layout provides a shorter distance between the slots and the CPU to help reach high memory speeds. The resulting DDR5 7000 support is the highest we’ve seen listed for Z690. Even beyond that he board, using extreme cooling methods (LN2), has been shown to reach an astounding DDR5 8300. Just be aware your mileage may vary based on memory and CPU. We had no issues running either of our sticks and even reached DDR4 6400 with no issues.

Above the DRAM slots are several headers. First are three (of eight) 4-pin fan headers. All fan headers output up to 2A/24W, which should be enough to piggyback a couple of fans on a header if needed or support a standalone water pump. 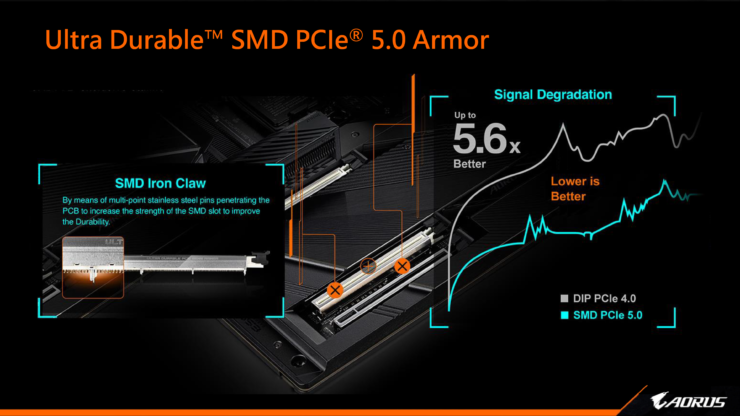 In the same area are two (of four total) RGB headers. In this area, there’s a single 3-pin ARGB and 4-pin RGB. If you’re going to use this as a daily driver and want more bling than what’s included, you have plenty of options for more lighting. You can control lighting through Gigabyte’s RGB Fusion software.

Along the right edge is where the Tachyon sets itself apart from most motherboards and shows off its overclocking pedigree. Here we spy several buttons and switches dedicated to overclocking, among other more standard items. Starting front the top is a simple power button. Below are four other buttons. The black one is to reset the CMOS while the white buttons cover Limp mode (reboot with default//safe settings), Retry button (forces a reboot), and a reset button. The +/- buttons raise or lower the CPU ratio/multiplier by one. Between these features and the DRAM slots are several solder spots for reading voltage, covering Vcore (die/skt/IO), CPU voltages (aux/vdd2/1v8/1v05) and PCH core voltage. Software is notorious for not being very accurate, so the ability to measure accurately, especially for the extreme overclocker, is key.

Next to the +/- buttons is a 2-character debug LED, followed by a 6-pin PCIe power connector to supply additional power to the motherboard. There’s a USB port here for a BIOS flashback or to use without reaching around your pot to the back of the board. Close to that is a switch that lowers the processor speed to cool it down and prepare the next benchmark. Where every degree counts in trying to break records, this is a convenient way to change values without using software. There’s a USB 3.2 Gen 2×2 (20 Gbps) front-panel port, a BIOS selection switch, and another reserved for later use here as well.

Gigabyte implements a beefy VRM configuration to the Tachyon, and rightfully so as it’s a motherboard designed for overclocking. Power comes from the 8-pin EPS connector(s) and onto a Renesas RAA229131 20-channel controller. The power configuration is a direct setup, so each channel from the controller goes to its own MOSFET without phase doublers or any teaming involved. Power is then sent to the 15 105A Renesas RAA22010540 Smart Power Stage (SPS) MOSFETs. The 1,575A for Vcore is plenty to handle the flagship Intel i9-12900K processor even when overclocked using extreme cooling methods.

The bottom half of the board contains the audio, PCIe, and M.2/SATA storage. Starting on the left, we see the fully exposed audio solution to the left of the separation line. The Z690 Tachyon uses the last-gen flagship Realtek ALC1220-VB codec, which most users will find more than acceptable, particularly for an ‘overclocking’ board. Some yellow audio capacitors are paired with a few red WIMA audio caps to complete the implementation.

There are three full-length PCIe slots in the middle of the board, with the top two reinforced and CPU-attached supporting PCIe 5.0. The top slot runs up to PCIe 5.0 x16, while the bottom slot is limited to PCIe 5.0 x8. If both primary slots are in use, the top slot drops back to x8, yielding an x8/x8 configuration. Gigabyte lists AMD Crossfire support, but SLI isn’t listed even though it has the bandwidth to support it. The bottom slot sources its lanes from the chipset and runs at a maximum of PCIe 3.0 x4.

Surrounding the PCIe slots are four M.2 sockets. All sockets support up to 110mm modules and a maximum of PCIe 4.0 x4 (64 Gbps) speeds. The top socket above the PCIe slot (M2A_CPU) sources its lanes from the CPU while the others (M2P_SB, M2Q_SB, and M2M_SB) get their lanes from the chipset. The M2M-SB socket supports both PCIe and SATA-based M.2 devices. Shifting our focus to the right edge past the chipset, we run into a horizontal 24-pin ATX power connector and six SATA ports (support RAID0/1/5/10 modes).

With all of the M.2 sockets, there is some lane sharing, but nothing major. If you’re running a PCIe-based SSD in the M2M_SB socket, SATA ports 2/3 are disabled. The worst case scenario is that you run four total M.2 drives, where you’ll still have four SATA drives available. 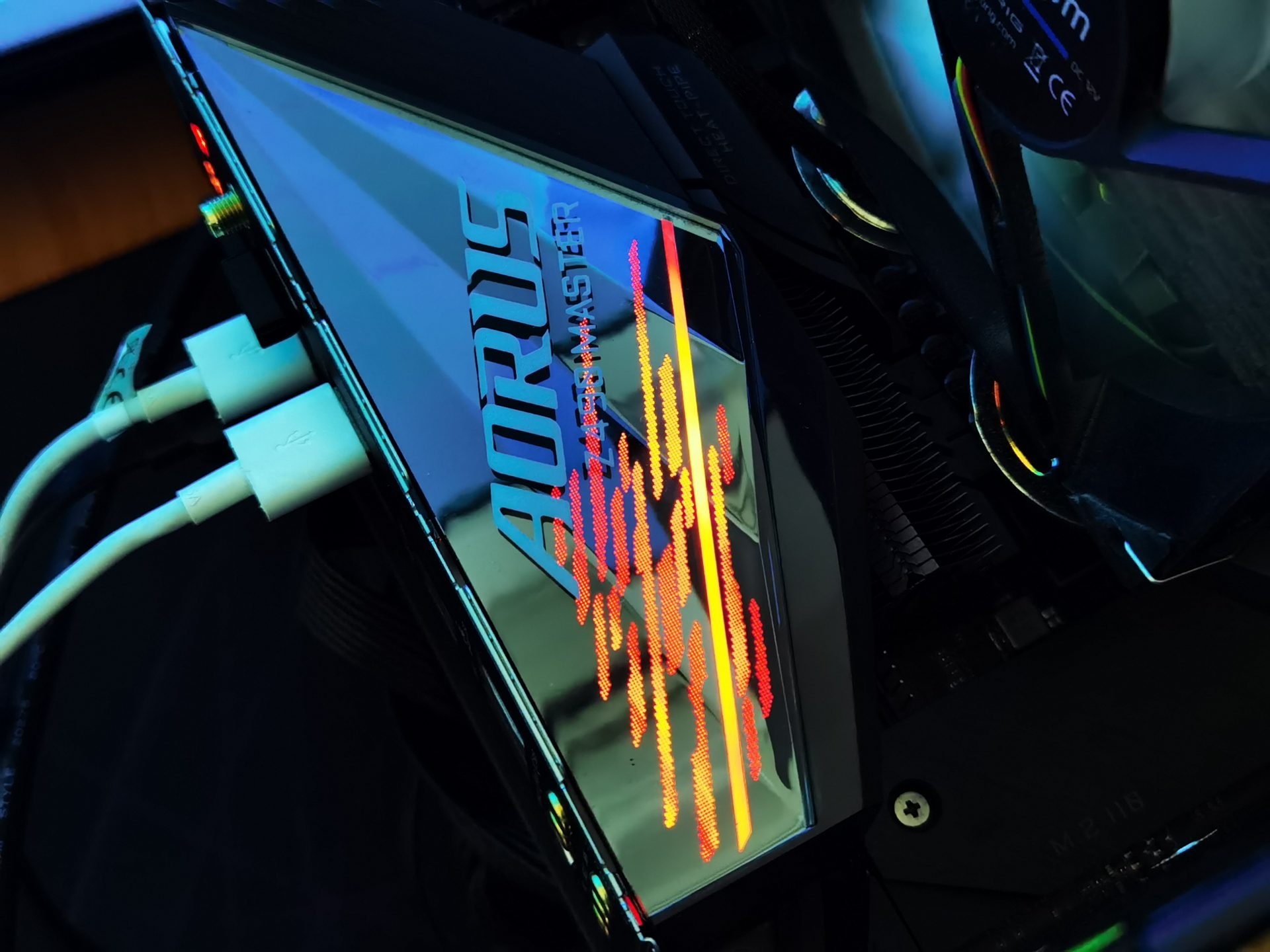 Across the bottom are several headers, including USB ports, RGB, and even some temperature sensor headers. Below is a complete list of all the headers across the bottom of the board.

As we move to the rear IO area, you’ll notice the IO plate is not pre-installed. For an overclocking board, this is acceptable considering common use is on an open-air test bench and the aesthetic plate isn’t needed. If you’re going to use it, the ports are labeled, and the writing is easy to read.

Working left to right, we run into the Q-Flash button to flash your BIOS without a CPU and an OC ignition button for testing the system (using water cooling, for example) without needing to boot the system. Next to those are legacy PS/2 keyboard and mouse ports. Using these low-level ports instead of USB can help with stability for the extreme overlocker. There are four USB 3.2 Gen 1 (5 Gbps) Type-A ports and three USB 3.2 Gen 2 (10 Gbps) ports, along with a USB 3.2 Gen 2×2 (20 Gbps) Type-C port. The seven Type-A ports should be enough for most users. A single HDMI port handles video output. Aslo here is the Intel 2.5 GbE network jack and the Wi-Fi 6E antenna connections. Last but not least are the 5-plug analog plus SPDIF optical ports on the right for audio.