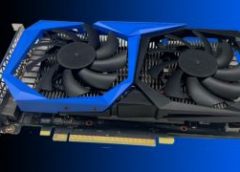 Intel’s new DG1-based Iris Xe graphics card is only compatible with Intel motherboards and CPUs. The news comes days after Intel revealed the first Xe graphics cards produced by board partners and due to be sold in retail PCs.

According to Legit Reviews, specific UEFI BIOS support is required to run the new graphics cards. An Intel statement explained that, “the Iris Xe discrete add-in card will be paired with 9th gen (Coffee Lake-S) and 10th gen (Comet Lake-S) Intel Core desktop processors and Intel B460, H410, B365, and H310C chipset-based motherboards and sold as part of pre-built systems. These motherboards require a special BIOS that supports Intel Iris Xe, so the cards won’t be compatible with other systems.”

We’ve reached out to Intel for further details, but the immediate question is whether this is mere technical expediency or a policy with future relevance. Our best guess is the former. This is a brand new GPU architecture and it will be easier for Intel to validate and ensure stability on a narrow range of in-house platforms than unleashing it for use in any PC with a PCI Express port.

The last thing Intel would want for its first coverage of Xe cards in end user systems are reports of crashes and bugs. On the other hand, we can’t entirely rule out Intel using Xe graphics as a tool to lock gamers into pure Intel platforms.

Whatever the truth, it’s a question for the future. These initial DG1-based boards are not gaming GPUs. Instead, they’re more low-end multimedia cards with some basic 3D capabilities. Indeed, they actually have fewer execution units than the Xe-based integrated GPU in the latest Tiger Lake mobile CPUs.

We’ll have to wait for DG2 and its mooted 512 execution units later this year to get the first true measure of Intel’s Xe graphics in a genuine gaming context. Early information implies performance on par with an Nvidia GeForce RTX 3070, but that’s all speculation for now.